In 1960 Bob Nalley, who was the District manager for William Cameron Lumber Co., took on the job of moving a house for long time family friends Charles & Mary Evans.  The house was right on the banks of Lake Waco, which was scheduled to have the water level raised.  During the move Mr. Nalley noticed how well he and Charles worked together and he began to think about a business opportunity for the both of them.

Mr. Nalley was also friends with Kenneth Moore, who owned many lumber yards in the Dallas area.  With his help they approached Charles, and formed the trio that started Redwoods Inc. in 1965.  It was to be a specialty lumber yard in Waco carrying Redwood and Western Red Cedar.  With those two species of lumber, Redwoods Inc. was the obvious choice for a name.

In 1976 Charles bought land close to the railroad tracks on Otis Street near Hwy 84 in the hope of moving the lumber yard.  It was a perfect location because the lumber was still being delivered by rail car.  He built a metal building and purchased the tools and saws to do his own milling.  Things were going well having both yards, but before the final move took place some changes affected the outcome of the move.  A downturn in the economy and yard access limitations (due to the expansion of Highway 84) lessened the property value for walk in retail trade, forcing a change in plans.  All operations of the company were moved back to the Esther Street yard. 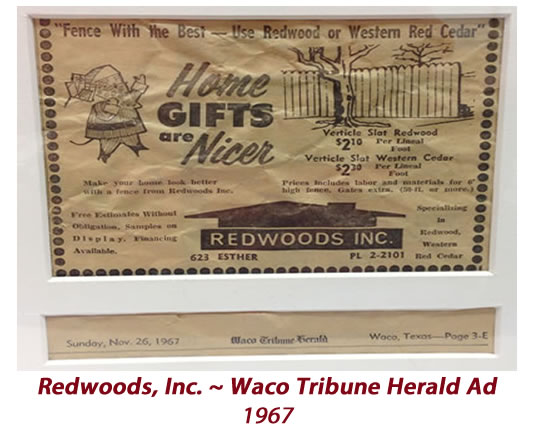 Charles & Mary’s son Greg graduated from Texas A&M University in 1989 with a BS in Dairy Science, and worked in that field until 1994, at which time he came back to work at Redwoods.  He worked his way from the yard into the office.  Eventually Greg and his wife Cynthia purchased Redwoods from his parents in 2005.

Today Redwoods Inc. still has that mom and pop atmosphere and has retained many of its original customers who have patronized it from the beginning. Many new customers have found Redwoods to be the place to go for specialty lumber for many of their home and business projects.